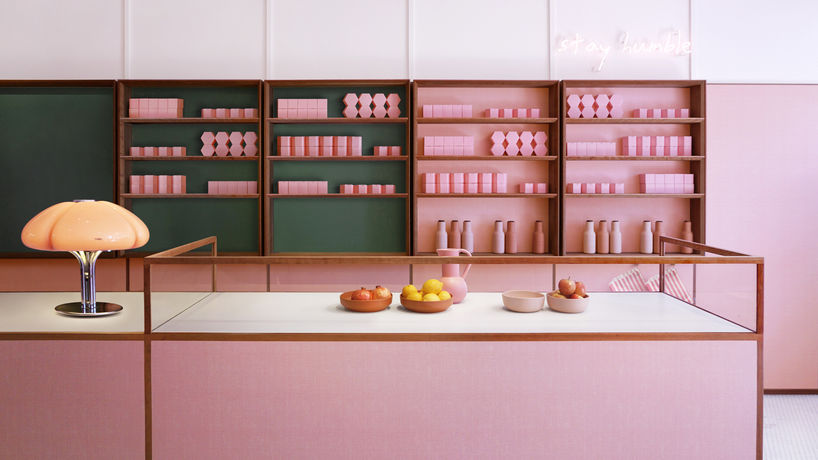 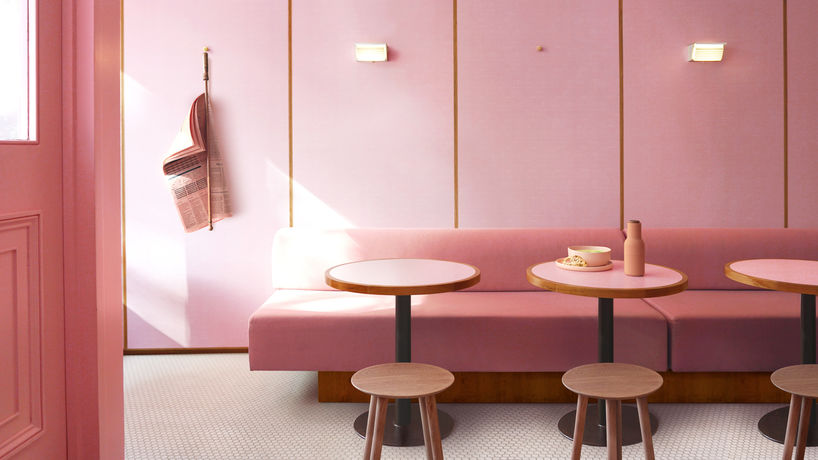 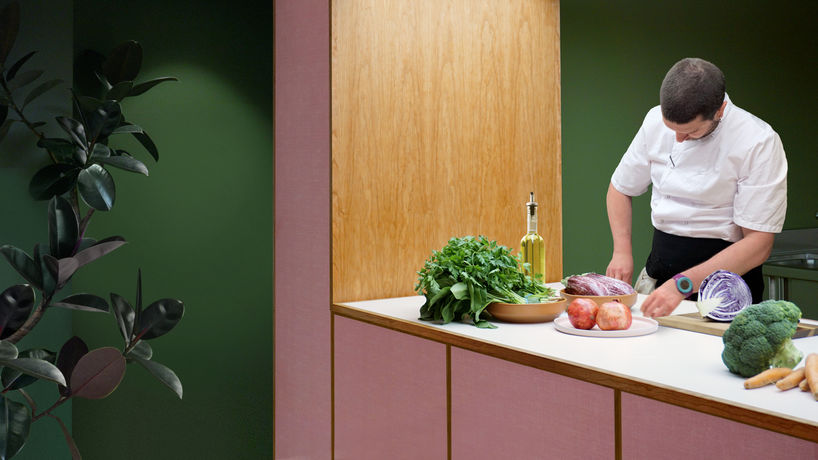 London – Humble Pizza is a vegan restaurant inspired by the 1950s Formica cafés of the West End.

Designed by Child Studio, the restaurant references the café culture of London’s King’s Road and the pastel-coloured, Italian-run Formica cafés frequented by writers, artists and bohemians. Offering vegan food including pizzas, salads and soups, the restaurant presents a plant-based alternative to the iconic cafés.

‘We have long been attracted to the cinematic quality of London’s Formica cafés, the duality of Modernist design language and the playful, almost cartoonish spirit,’ say Chieh Huang and Alexey Kostikov, founders of Child Studio. In this vein, the restaurant diverges from the traditional, artisanal design cues associated with veganism and champions a more synthetic, playful aesthetic.

As explored in our design direction Neo-nutrition, food branding is moving away from buzzwords like ‘organic’ and embracing a more surprising visual identity. 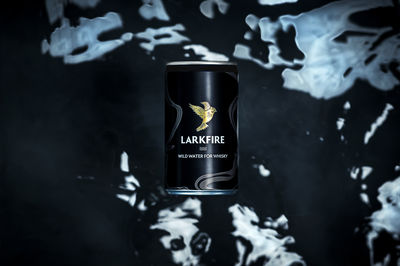 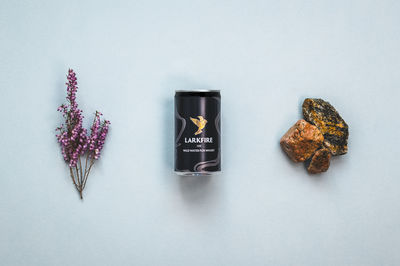 Scotland – Larkfire is a brand of canned water aimed at whisky drinkers who prefer water with their Scotch.

The product is to be launched in September as an alternative to both bottled and tap water, whose respective high mineral content and levels of chlorine can affect the aroma and taste of whisky. Sourced from the Outer Hebrides, Larkfire’s wild water is soft and low in mineral content, making it more suitable as a mixer.

‘In Scotland we have a law specifying how whisky should be made, yet we’re willing to dilute this centuries-old craftsmanship by allowing bog-standard tap water to be added to our great drink,’ explains co-founder James McIntosh. ‘We wanted Larkfire to be as close to the perfect water for whisky we could find in the UK and we think we’ve got that.’

Larkfire not only taps into the expanding premium whisky market, but also demonstrates the growing demand for alternative mixers that offer a more premium experience. See our Tonic & Tonic microtrend for more.

Global – The technology company has added six new media literacy lessons to its Be Internet Awesome curriculum to teach minors how to use and navigate the internet safely.

The programme, which was launched in 2017 in collaboration with The Net Safety Collaborative and the Internet Keep Safe Coalition, has been expanded to help teach kids how to determine whether an online news source is credible. In addition to tackling fake news, the updated curriculum also helps them to identify and respond to a range of other online deceptions, such as phishing or bots posing as real people.

‘Kids today need a guide to the internet and media just as they need instruction on other topics,’ writes educator Amy Mascott in a Google blog post. ‘We need help teaching them about credible sources, the power of words and images and more importantly, how to be smart and savvy when seeing different media while browsing the web.’

For more on how brands are rewriting moral codes for the digital era, read our Morality Recoded macrotrend. 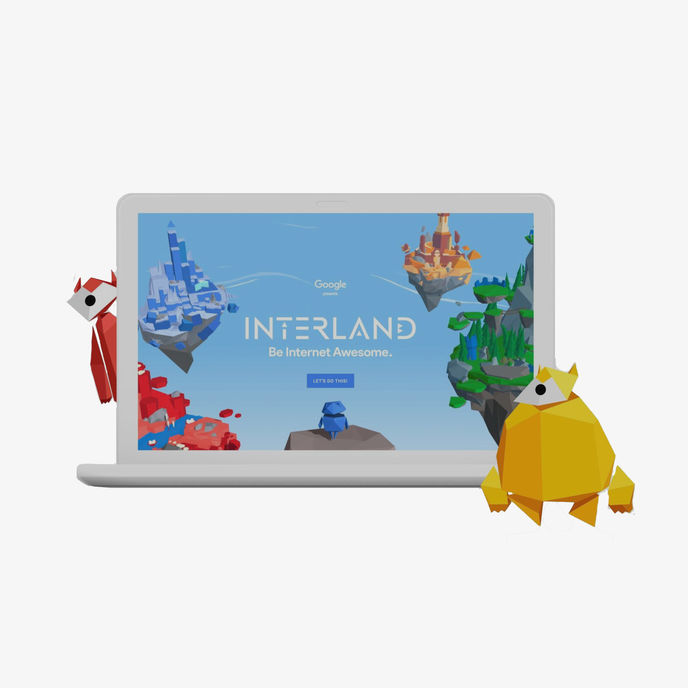 Be Internet Awesome by Google

Red, White and You Do You by Billie

A year after Billie’s disruptive Project Body Hair campaign, which featured women unapologetically embracing their underarm, leg and even toe hair, the brand is extending its message to include pubic hair. Red, White And You Do You is a 4 July campaign that tackles the notion that women in swimsuits must be hairless.

Directed by Ashley Armitage, who is known for her work reclaiming the female gaze, the new film stars women confidently sporting body hair on the beach, redefining the meaning of ‘beach body ready’. The brand continues to frame shaving as a personal choice for women, ‘whether you prefer to be bushy, bare or anything in between’.

With more brands rebranding the act of shaving – and no longer viewing women as an after-thought – natural pubic hair is no longer left out of the body hair conversation. 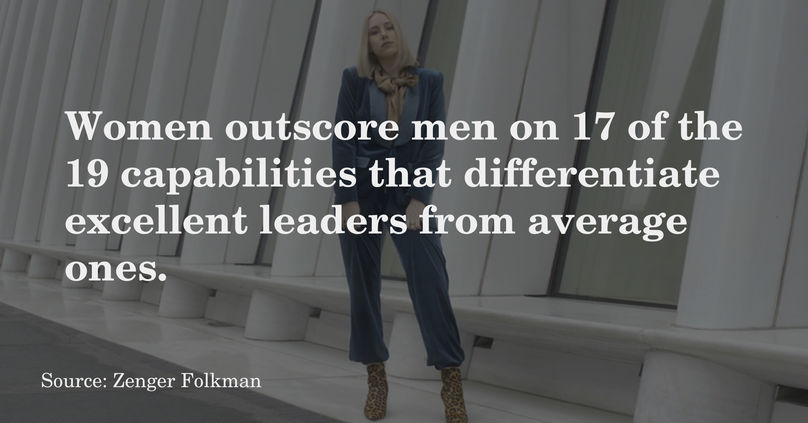 The results show that woman are often rated as excelling in taking initiative, acting with resilience, practising self-development and demonstrating integrity and honesty. Despite this, they continue to represent a low percentage of Fortune 500 CEOs, suggesting unconscious bias may be contributing to a continuing lack of women at senior levels.

Amid rising levels of national anxiety and pessimism, Elodie Marteau explores how French youth are rejecting the old France mindset in favour of new, regional role models and digital communities.

Unrest is being felt across the country owing to widespread nationalist and political protests, compounded by France recently launching national civic service for its youth. The capital city of Paris is also losing power as the epicentre of youth culture, with young people turning to digital platforms and suburban communities to establish their place and build a sense of identity and purpose.

A recent report by Jean-Louis Borloo, a former French minister, presented France as a two-speed country where 500,000 young French people – more than 50% of Paris’s young suburban population – are suffering from isolationism and forced communitarianism. Now, France’s young people are looking away from the capital towards new and inspiring models.

For brands, this outer-looking mindset is becoming a source of inspiration and untapped space to align with France’s overlooked youth. In 2018, Lacoste collaborated with Moha La Squale, a young rapper from Créteil, with a collection celebrating La Squale’s own personal style, strongly rooted in his suburban upbringing and spirit. 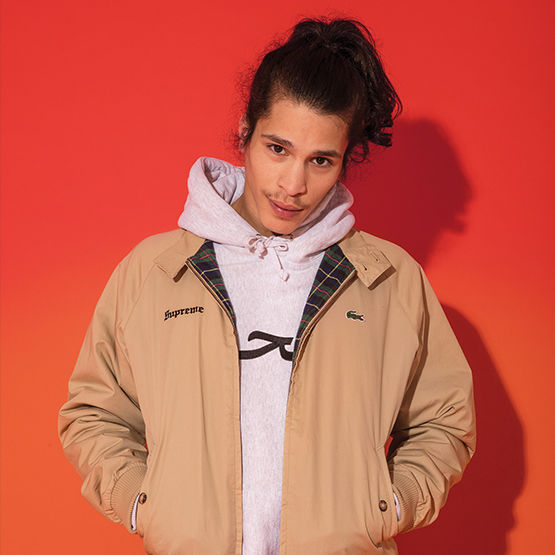