By Olivia Houghton and Holly Friend 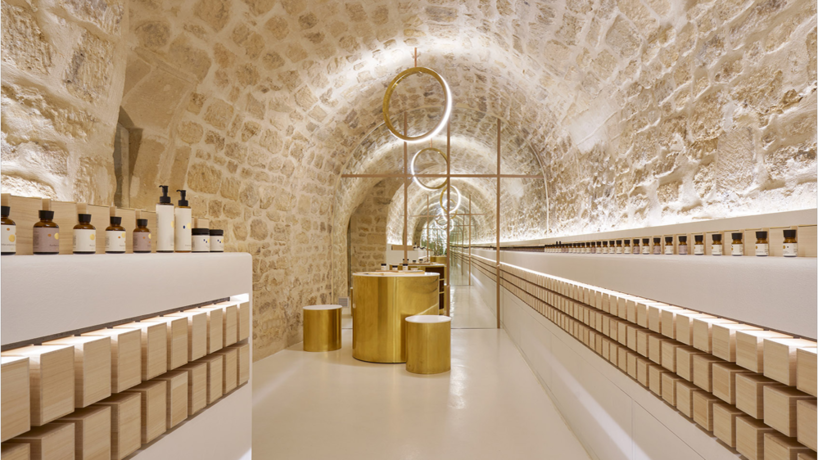 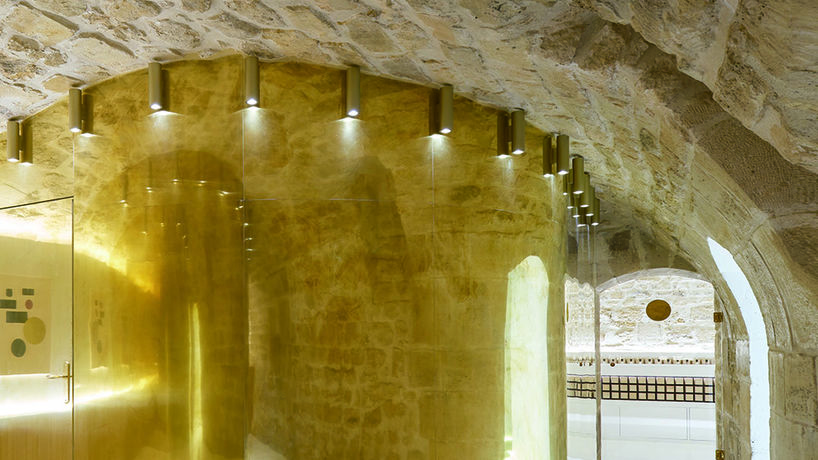 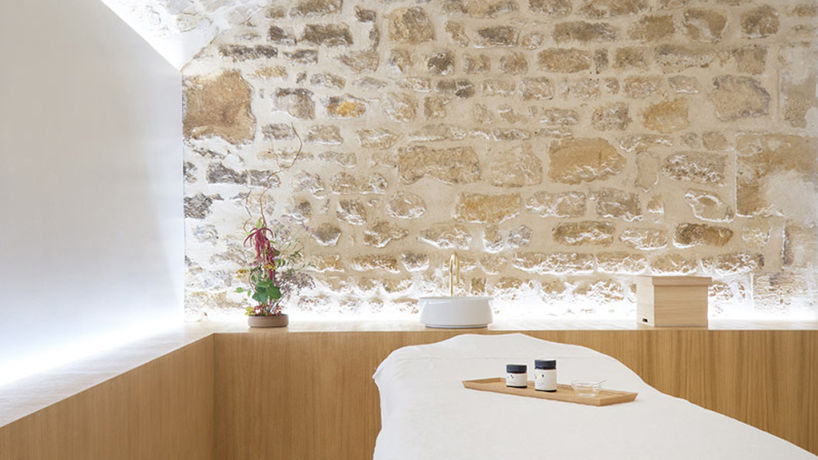 Paris – The salon by En, a subsidiary of Lenor, will offer hyper-personalised skincare treatments that draw inspiration from east Asian skincare philosophies.

En comprises four spaces, designed to be used for skin counselling, treatment, massage and essence blending. Following a personalised consultation, the salon adapts each beauty product to the customer’s skin type, combining the solutions to create the best possible blend for treatment.

The flagship store will be a showcase for the brand’s 100 beauty essences derived from plant extracts, rock salts and Japanese tea leaves. The skincare products, branded by studio Canaria, use geometric shapes rather than words to translate the ingredients on the label, creating a New Bricolage way of communicating that is decipherable by all.

Japanese beauty has long been overshadowed by the success of its South Korean counterpart, but new brands are helping the sector to reassert its position on the beauty map. 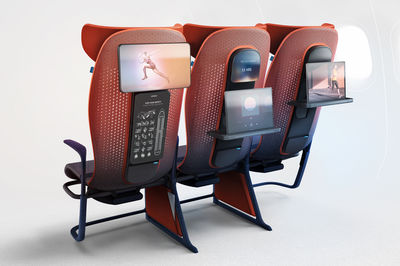 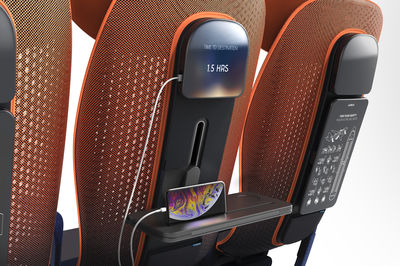 London – The seating concept was created by design studio Layer as a way to improve the economy class flying experience.

Designed for Airbus, the Move concept uses a smart textile that would allow passengers to monitor and control their seat conditions using their phone. The chairs are created from a digitally knitted wool with integrated conductive yarn, which connects the seat cover to sensors capable of detecting the flyer’s temperature, tension and movement.

The Move app analyses the data and sends targeted messages to passengers, prompting them to move around the cabin, do in-seat stretches or stay hydrated. Users can also select different modes, such as ‘massage’, ‘meal time’ and ‘sleep’.

‘At Layer, we believe good design should be accessible to all,’ says Layer founder Benjamin Hubert. ‘All too often, new concepts for flying are focused on innovation in business class.’

To understand how brands can best use these types of material innovations, read our Material Far Futures report.

US – The drugstore chain is implementing the payment system to make shopping more convenient for Chinese tourists.

Alipay users can shop at 3,000 Walgreens locations in major cities such as New York, San Francisco and Las Vegas to begin with, according to the brand, but the number is expected to reach 7,000 by April 2019. The Alipay app, which is owned by the Chinese conglomerate Alibaba, offers an easy way for users to pay for goods while overseas, without high foreign transaction fees.

‘Not only can [Chinese consumers] buy our products via our dedicated store on Alibaba’s Tmall Global marketplace, but they will now also be able to shop in the US, using Alipay as they would in China,’ says Walgreens president of operations Richard Ashworth. According to China’s Ministry of Culture and Tourism, Chinese travellers took about 140m trips abroad in 2018.

As more Chinese consumers travel internationally, Lee Folland discusses the importance of catering for these consumers in his latest Opinion piece. 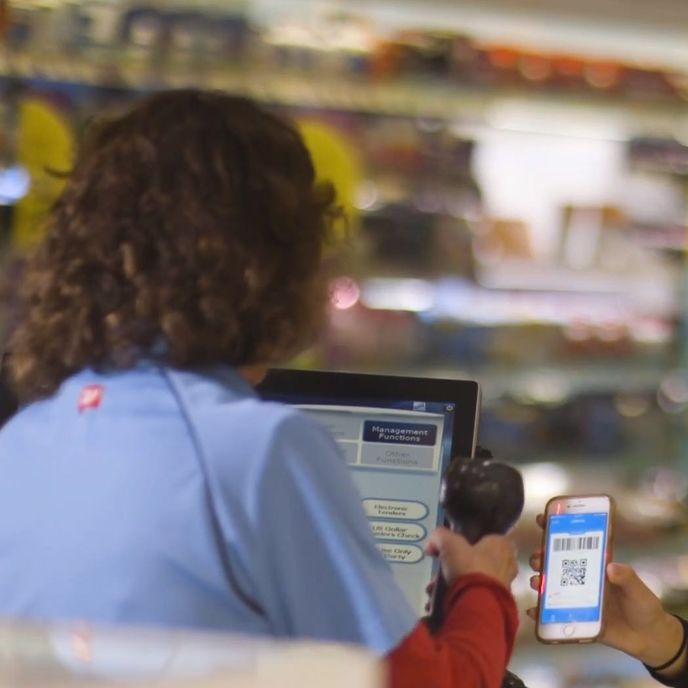 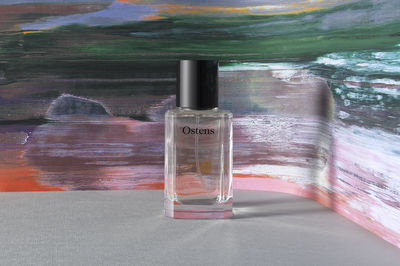 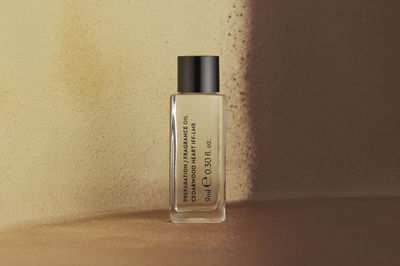 To make its scents, Ostens uses ingredients sourced from Laboratoire Monique Rémy (LMR) – the natural fragrance division of International Fragrance & Flavours (IFF) – which are typically only available to those in the industry. It offers scents such as rose, cedarwood and jasmine as perfume oils, which contain ‘the highest legally and technically permitted concentration of each carefully chosen ingredient’, as well as eau de parfum.

The brand encourages wearers to layer the fragrances with ones they already own to experiment with new combinations of scent. Bringing this concept into the physical world, Ostens has opened a pop-up gallery in London’s Marylebone that invites visitors to experience scent in a more immersive way than would be typically available in a retail space.

The perfume market is changing as consumers continue to shun mass-market fragrances in favour of premium, niche scents.

India is the biggest market for karaoke app TikTok, according to numbers by Priori Data. Having merged with musical.ly in 2018, the app is overwhelmingly popular with young people, many of whom have become minor celebrities with sizable fanbases. In 2018, TikTok was downloaded more than 119m times in the country, compared with fewer than 40m downloads in its second most popular market, the US.

According to Quartz, Indians’ adoption of TikTok is not surprising, given the country’s prominent Bollywood industry and passion for singing and dancing. The app offers an inexpensive platform for young people to perform, allowing them access to a much wider audience than they might typically be exposed to.

The social media and music industries are merging, as social networks and apps increasingly become spaces where music is not just shared, but also created. For more, read our microtrend.

With the streaming service allowing users to mute artists they find offensive, Alex Brammer, a lawyer at a UK record label, considers whether hiding content is a reasonable compromise or a risk to musical discovery and serendipity.

In its latest update, music streaming service Spotify introduced a function allowing iOS users to mute specific artists. Once muted, the artist is removed from the user’s playlists, libraries and radios. All a user needs to do is open the dropdown menu on the artist’s profile page and select Don’t Play This Artist.

The new feature was quietly introduced following growing pressure on Spotify to take a stance on moral issues. In particular, the 2019 release of the documentary Surviving R Kelly has re-opened the discussion on the role of content aggregators and brands when it comes to the ethical, moral and social matters relating to their content.

There is nothing stopping users from simply blocking artists whose music they don't like, or – worryingly – because of cultural hostilities. Spotify, alongside platforms such as YouTube and Instagram, are designed to promote discovery, so if people are given the power to mute content, their media experience will become an insular, hyper-personalised echo chamber. 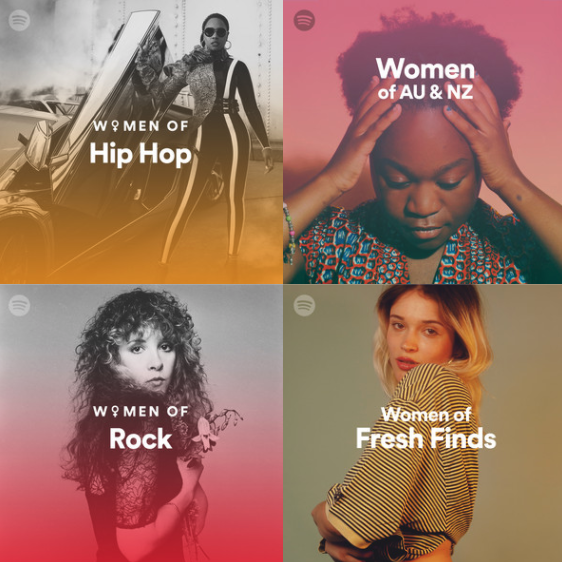 Design : Finance : Society
Load More
You have 2 free News articles remaining. Sign up to LS:N Global to get unlimited access to all articles.
Discover Our Memberships Sign in