Pinterest looks to improve its users’ mental health, generation Rent could face homelessness in old age, and why young men are driving the hair colour market. 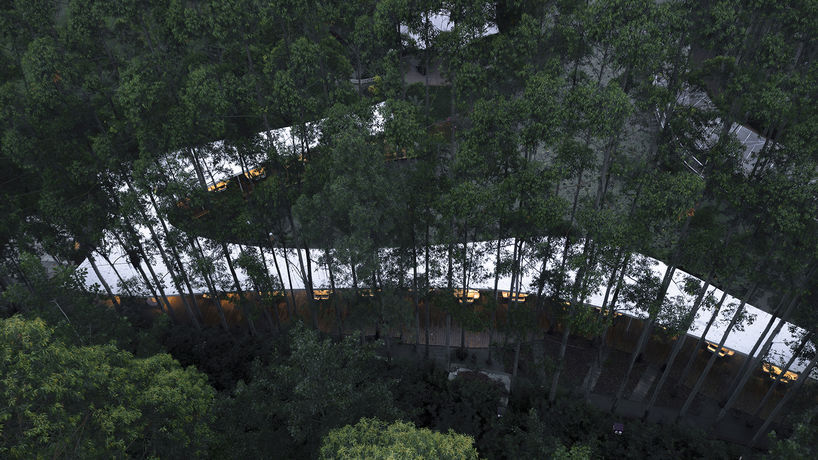 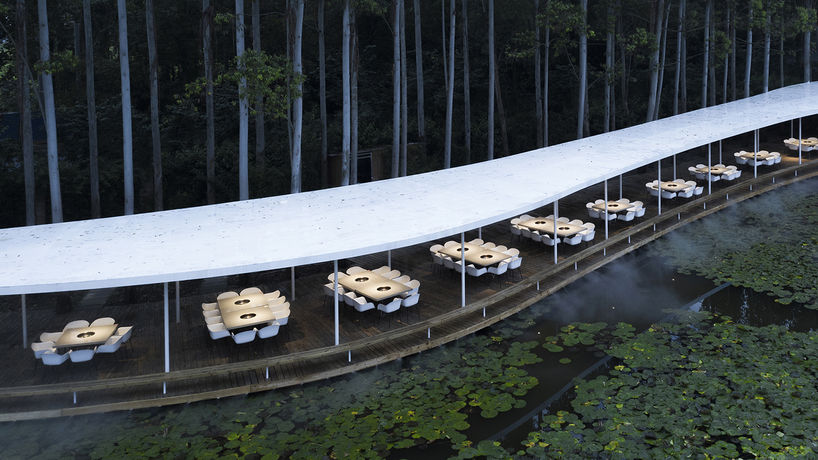 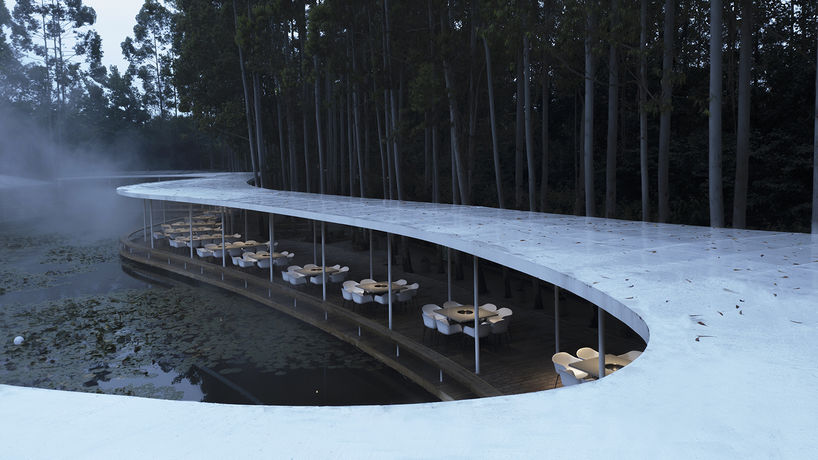 Chengdu – The Garden Hotpot restaurant takes advantage of the region’s climate to immerse diners in its verdant landscape.

Architects MUDA built the restaurant to weave its way through a eucalyptus forest in China's Sichuan province. The structure is designed in response to its environment and uses a steel canopy and anti-corrosive wood to blend into the forest, respecting the natural landscape and minimising human intervention.

MUDA also used the project to experiment with small scale, low-cost architecture. Local migrant workers were hired to form the construction team, and while some were lacking professional skills and tools experience, the architects responded by creating simplified architecture guides, allowing all to be part of the build.

As explored in our interview with Snøhetta, which discussed the architects’ plan to open the Svart hotel in the Arctic Circle, architecture should be built in response to its natural environment and climate. 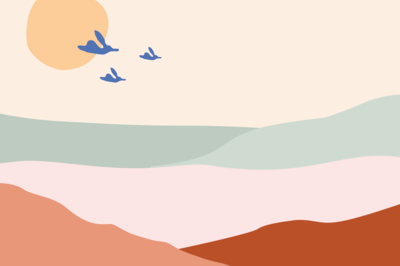 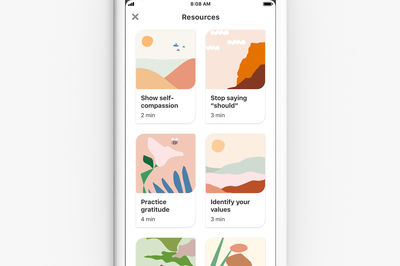 San Francisco – The visual discovery engine is launching a collection of emotional wellbeing activities for stressed, anxious or unhappy users.

Debuting in the US via the Pinterest app, users will see a prompt to explore a series of resources when they search for relevant key words, such as ‘stress quotes’ or ‘work anxiety’. These resources will look different from other content and users’ interactions with these activities will be private and not connected to their account.

The guided activities were created with the help of emotional health experts at Brainstorm, the Stanford Lab for Mental Health Innovation, in addition to advice from Vibrant Emotional Health and American's National Suicide Prevention Lifeline. They will include tools and advice to help people relax, as well as self-compassion exercises, with each resource designed to be an interactive way to improve mood.

According to Pinterest, the aim of providing wellbeing activities is to address a broader spectrum of its users’ mental health needs, while creating a more compassionate online platform.

UK – A government inquiry has found that more than 600,000 members of Generation Rent are facing homelessness after retirement.

The inquiry is based on the understanding that people’s incomes typically halve after retirement, meaning those in the private rented sector who pay 40% of their earnings towards rent could be forced to spend 80% of their pension on rent. This means, according to the report, that at least 630,000 Millennials will be unable to afford rent and find themselves homeless or required to move into temporary accommodation at the state’s expense.

‘The number of households in the private rented sector headed by someone aged over 64 will more than treble over the next 25 to 30 years,’ says Richard Best, the chair of the all-party parliamentary group on housing and care for older people. ‘But unless at least 21,000 suitable homes are built a year, there will be nowhere affordable for them to live.’

With this concerning future imminent for many UK adults, brands are well-placed to step in and offer assistance. Read our opinion piece by Kim Colin to see how IoT-enabled smart homes could support ageing consumers. 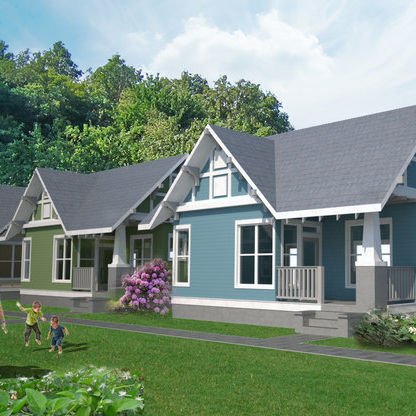 US – The baby care brand has partnered with Google’s sister company Verily to create diapers that monitor babies’ nappies, feeding and sleep.

Lumi by Pampers claims to be the first all-in-one connected care system for babies. The system is comprised of an activity sensor, which can be attached to diapers, a video monitor with night vision, and the Lumi app, which is the core of the system. The app stores all the information parents need to know about their babies' routine in one place, charting data on a daily and weekly basis so parents can track their baby’s development over time.

According to Pampers, the Lumi connected care system helps parents by combining real-time data with their paternal intuition. The app will also include childrearing content produced by Pampers’ team of baby experts. 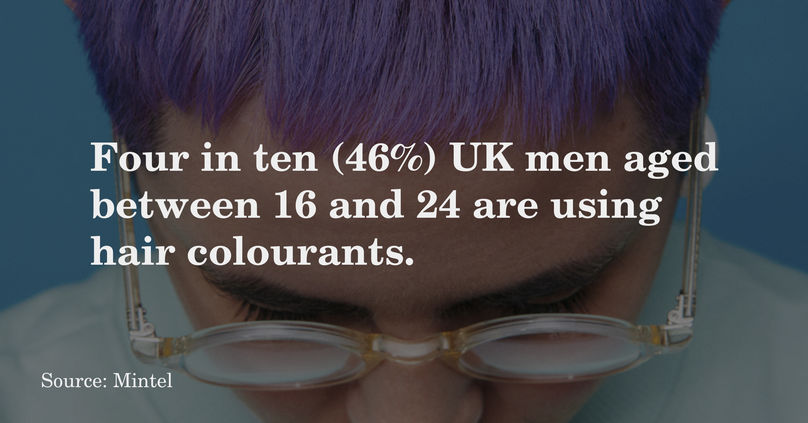 When it comes to the burgeoning male beauty market, more young men are using hair colour to express their individuality, according to a new report by Mintel. The research found that the number of 16–24-year-old British men using hair colourants has grown from 38% in 2018 to 46% in 2019.

Furthermore, Generation Z men are drawing inspiration from looks on Instagram when it comes to their appearance. One in five (19%) men who colour their hair at home say they took inspiration from social media personalities for their latest colour choice. By comparison, just 7% of female users are inspired by influencers.

Beyond hair colour, the growth of Soft Masculinity is inspiring a new male beauty ideal rooted in femininity and prettiness, defying the macho qualities once valued by society and creating new opportunities for beauty brands.

Sophie Galvani, global vice president at Dove, on smashing stereotypes and celebrating beauty idiosyncrasies in the age of algorithmic beauty.

According to Galvani, Dove has a clear brand purpose: to make the beauty experience accessible to everybody. ‘We’d already created advertising for women that showcased diversity, like our Campaign for Real Beauty, which we launched in 2004. But we wanted to take it a step further. The goal was to break down stereotypes for women at a deeper level, getting to the root of the issue to solve it systemically as opposed to just running an advertising campaign. That's where Project #ShowUs came from.’

The mission behind Project #ShowUS was to build the largest bank of stock imagery created by women. To achieve this, Dove partnered with Getty Images and Girlgaze, a creative network of female-identifying photographers. ‘We shot over 5,000 images from 39 countries around the world. These photos are not digitally distorted – they all break beauty stereotypes in their particular markets, and they're self-tagged,’ says Galvani.

‘Stereotypes of women are so different across the world,’ she continues. ‘But the underlying issue is the same. And because Dove is a global brand – we sell products in 179 countries around the world – we want to make global change.’ 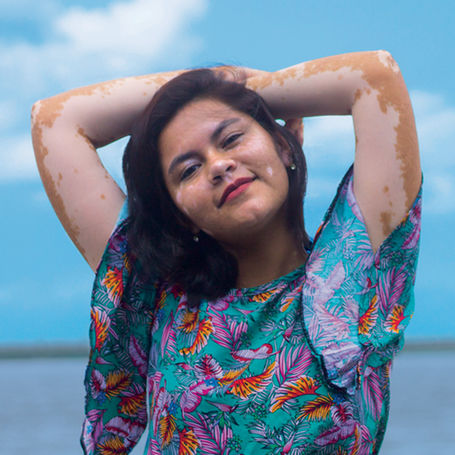 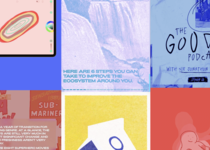 Stat: The pandemic boosted US business start-ups in 2020:

Despite the pandemic often being associated with a struggling retail market and sharp decline in small...

Technology : Retail : Online Shopping
Load More
You have 2 free News articles remaining. Sign up to one of our membership packages from just £100 a month.
View Subscription Offers Sign in