A museum for African diaspora, an energy-neutral bus station and how consumers can achieve better living through listening.

Global – Its latest campaign highlights the fact digital technologies have become a distraction from productivity.

In response, the file transfer company has released a digital platform and campaign entitled Please Leave, pitching WeTransfer as a brand to help people reclaim their time with simple online tools. Using a short film directed by Stink Studios and dedicated microsite, the campaign reflects the brand’s mission to remove friction from every aspect of the creative process, resulting in more time to spend offline. With WeTransfer’s simplified tools, such as Collect, WePresent and Paste, users can bring their ideas to life before returning to the physical world.

For more on why our future devices should be disengaging, and why design should be user-unfriendly, read our Opinion piece. 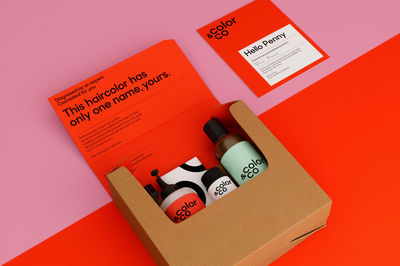 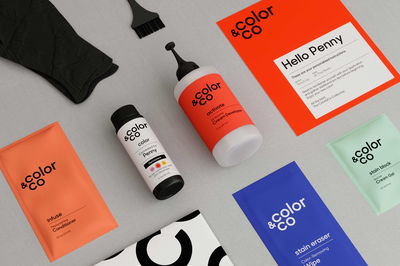 Color&Co allows consumers to co-create their own custom hair dye based on hair type and colour goals. The on-demand, direct-to-consumer service starts with either a live video consultation with a professional colourist or an in-depth online questionnaire. Once a customer’s unique hair colour is determined, the brand then delivers specially-mixed products in personalised packaging within days, keeping details of each formulation on file for easy re-ordering or subscriptions.

‘Beauty consumers are asking us for increasingly personalised experiences, and we saw a real opportunity to innovate in this cornerstone of our business,’ says Guive Balooch, vice president of L'Oréal Technology Incubator. ‘Hair colour results depend on a variety of factors, so it was important to develop highly accurate new technology that could deliver unprecedented at-home shade precision.’

As we explore in our Colour Refresh microtrend, brands are upgrading at-home hair colour with salon-quality dies and precision application tools.

Founded by paleoanthropologist Richard Leakey and designed by architecture firm Studio Libeskind, the museum will be built on a cliff edge in the historical Rift Valley region. The project will be the first of its kind to present research and discovery of more than two million years of human history and Africa’s part in evolution, biodiversity, overpopulation, war, disease and climate change.

Due to open in 2024, the museum will be comprised of interactive, cutting-edge exhibition spaces. ‘I created a series of dramatic spaces within the museum that are architecturally dynamic and provocative, creating a unique context for the museum’s exhibitions that does not pacify artifacts, but enhances and enlivens them,’ says architect Daniel Libeskind.

Africa is at long last receiving recognition for its rich culture and historical impact. To see how young creatives on the continent are celebrating their heritage, read our Q&A with Dafe Oboro. 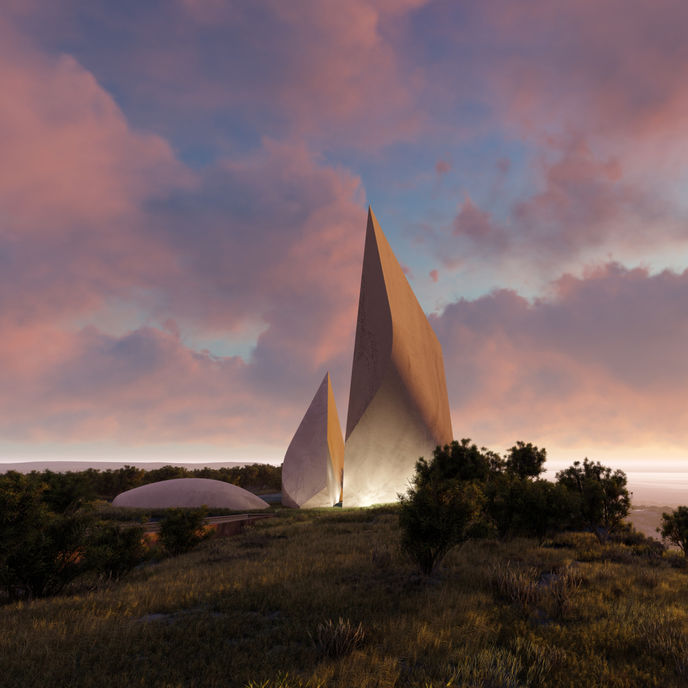 Ngaren: The Museum of Humankind by Richard Leakey, designed by Studio Libeskind 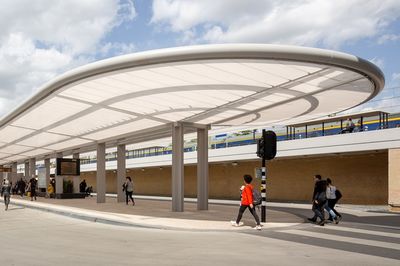 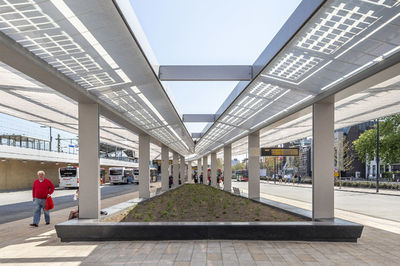 Tilburg – A new public transport hub in the Dutch city of Tilburg uses 250m² of solar panels to produce its own energy.

Its lighting, digital information signs, heated waiting benches, service point and the station's staff canteen are all powered by solar panels installed on top of its expansive awning. The energy-neutral bus station was designed by Dutch architecture firm Cepezed, with a structure divided into three sections. It is shaped as a minimalist, triangular circuit, with bus stops positioned around the outside.

In addition, the awning incorporates self-cleaning ethylene tetra fluoro ethylene (ETFE) foil, which is unaffected by atmospheric pollution and other forms of environmental weathering, thus requiring little maintenance. Designed for accessibility, the station uses ramps throughout to allow wheelchair users to reach its elevated terrace, while handrails between the terrace and the platform bear braille signage.

By considering inclusivity, practical maintenance and renewable energy, the station’s design demonstrates a positive future for cities, something examined in more detail in our dedicated Opinion piece. 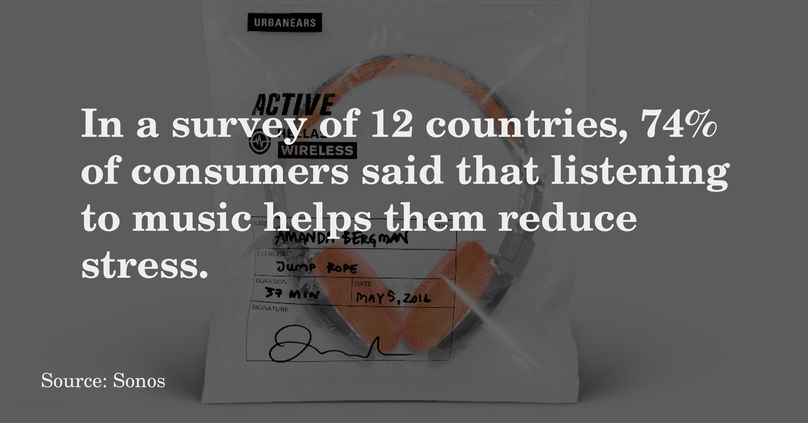 We can achieve a better quality of life through music, according to a new study by Sonos of 12,000 people in 12 countries. Some 74% of participants in the The Science of Listening study said listening to music helped to reduce their stress levels, while 40% admit that music has made them cry unexpectedly. The report also found that music helps us form new bonds with people – 70% said that people with good music taste are more attractive.

‘Many people probably aren’t aware of how much they rely on music to regulate their moods throughout the day,’ says Daniel Müllensiefen, a professor of music psychology at Goldsmiths University in London, in relation to the study. ‘We take it for granted because music is so much more available than it used to be. You can virtually listen to anything at any point in time these days.’

As our relationship with wellness and self-care fluctuates, music is being used as an accessible tool to regulate our emotions on a day-to-day basis.

Brands are entering a new era of transparency in which they own up to mishaps and failures, and take the opportunity to flourish in new ways, writes Lara Piras.

In 2018, fried chicken group KFC experienced a now-legendary logistical failure when its new delivery firm hit problems across its supply chain, causing its stores to run out of chicken, and leaving many consumers in a flap. KFC was forced to temporarily close 600 of its UK stores, with the brand later reportinga 5% drop in operating profits as a result.

KFC turned this mishap into an opportunity, however, with full-page adverts in the UK’s leading tabloid newspapers. Offering a humble message, and publicly thanking its staff in the advert, KFC largely came out unscathed and probably boosted loyalty among its fans.

Following suit, Danish brewer Carlsberg recently launched an honest campaign in which it admitted its beer was, ‘Probably not the best beer in the world’ – an acknowledgement that, in the age of craft beer and as the brand chased volume and low prices, its lager had become below average. 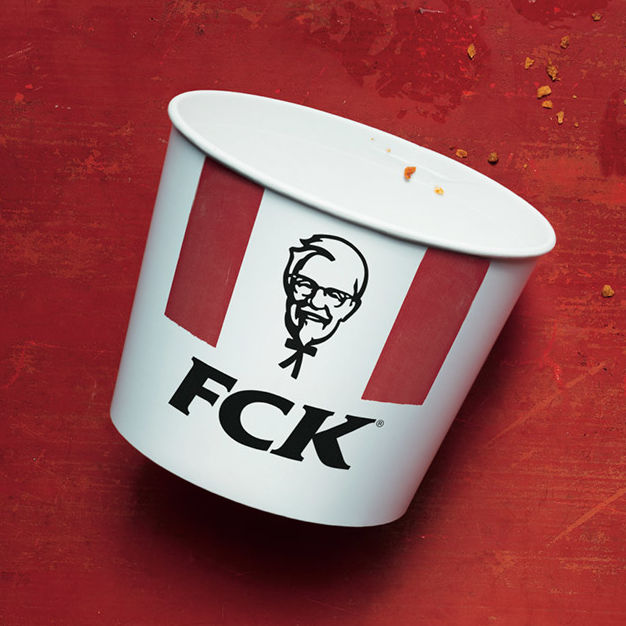