Milan – Prada has launched a new microsite to go with its latest range of pop culture-inspired perfumes.

In October the Italian luxury retailer launched Olfactories, a provocative line of perfumes inspired by pop songs and films from decades past, including New Wave band Soft Cell’s Tainted Love and Prince’s Purple Rain. Now, to give customers more of a flavour for each new scent, Prada is encouraging customers to experience them online using animated mood boards inspired by dreams, according to perfumer Daniela Andrier.

‘Dreams are really impressions when you awaken,’ says Andrier. ‘The colours and feeling are all broken up in one’s mind, and that is how these fragrances were constructed – reflecting that these are possibly memories that belong to them, the consumers.’

LS:N Global first started documenting this offbeat aesthetic in our 2013 design direction Futurist Montage, in which we looked at designers and photographers who were combining digital and analogue images to create unfamiliar and uncanny overlays. 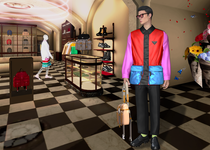 Society : Energy : Stat
Load More
You have 2 free News articles remaining. Sign up to one of our membership packages from just £100 a month.
View Subscription Offers Sign in