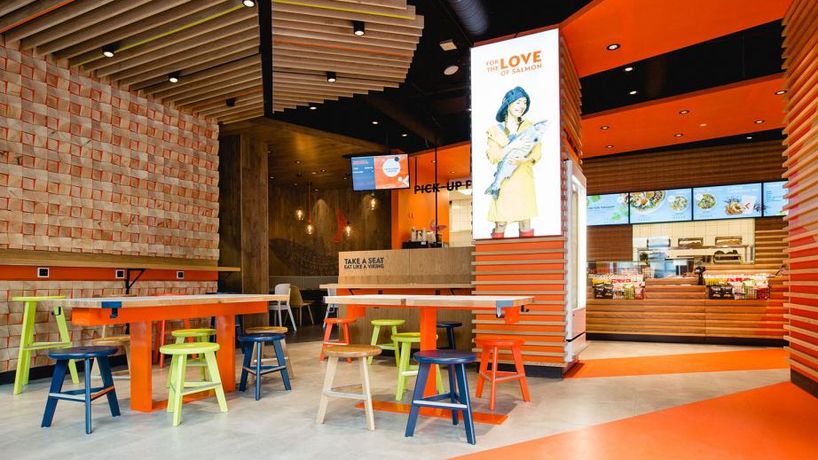 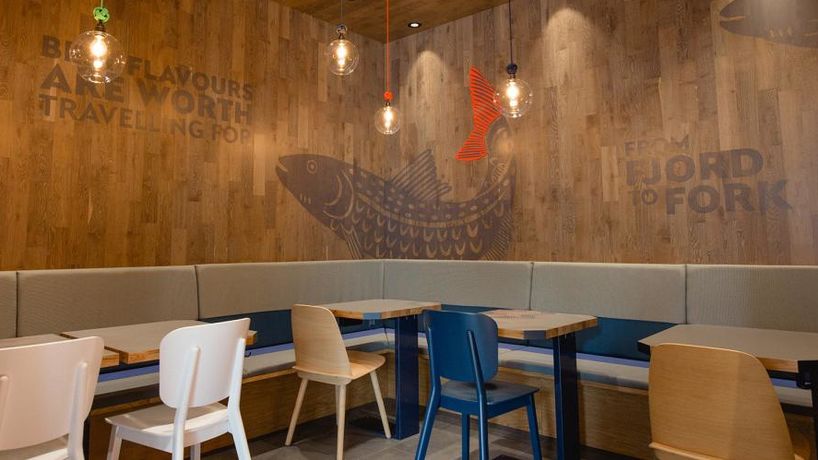 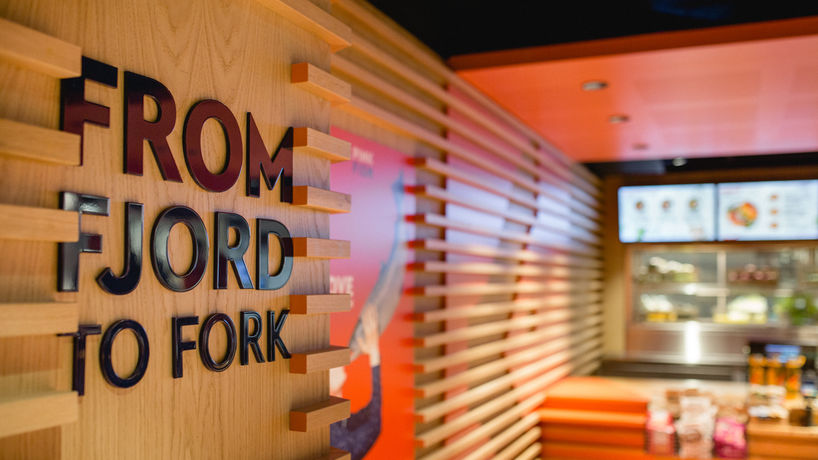 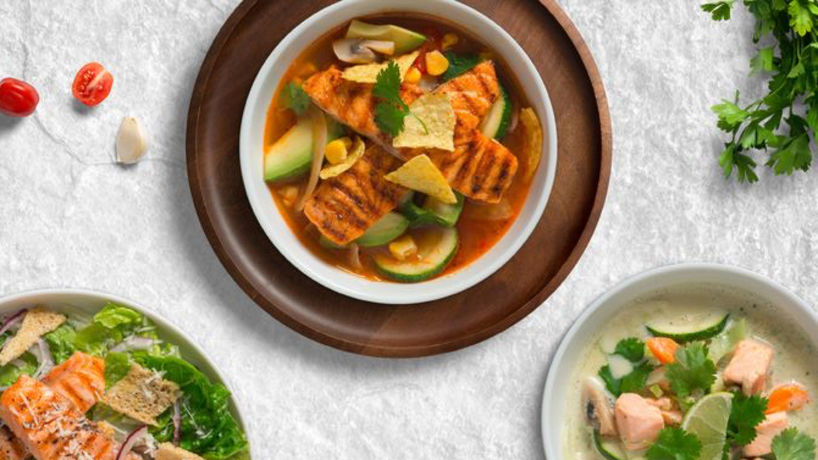 Norway – Pink Fish is a new fast-casual restaurant that offers high-quality seafood meals without compromising on convenience. The menu is formed of sustainably sourced Norwegian salmon served in various ways, from burgers and wraps to salads and hotpots.

While providing food for those on the go, the brand doesn’t cut corners on sustainability. The packaging and straws are both compostable and produced from a byproduct of sugarcane and corn, while the cutlery is made from 100% natural starch.

More and more chefs are becoming involved in the fast-casual sector to bring consumers high-quality food at a low cost. Pink Fish founders Geir Skeie and Ronny Gjøse hope to provide ‘delicious global flavours on a scalable concept’. ‘To be able to show all the exciting flavours you can pair with Norwegian salmon is great fun, and we love challenging established truths about how seafood can be used,’ says Skeie.

China – Chinese e-commerce retailer, JD.com has unveiled its first fully automated warehouse. With only four humans employed to service the robots, the centre is exclusively operated by robots and machines, that can produce up to 9,000 online shopping orders per hour.

‘Once packages are taken off trucks at one side of the Kunshan facility, they’re loaded onto a complex network of automated machinery, where fast-moving, automated conveyors zip each box around,’ explains the company in a press statement. ‘Image scanners can check the packages in microseconds, while JD’s smart logistics system calculates where the packages should be dropped off. The packages are grouped by region into large bins, which are picked up by driverless forklifts and brought to the corresponding truck for delivery to the right destination.’

While much of the retail process is already automated, brands are exploring how more complex tasks such as picking and packing items could be implemented on a larger scale. For more on how automation might affect the future workforce, see our Brand Culture 2020 report.

The initiative proposes that those below the federal poverty line – defined as a household income of £9,035 ($12,000, €10,356) for an individual or £18,824 ($25,000, €21,576) for a family of four – would receive half-price MetroCards. With monthly subway passes costing £91 ($121, €104), many low-income citizens are struggling to afford travel to essential destinations such as work and schools. Although yet to be approved by the full city council, the plans suggest an estimated £80m ($106m, €91m) of city funds are needed to pay for the programme, which could be executed with a new tax on high-income earners.

Similar initiatives are gaining momentum outside New York in places like Seattle and Toronto, where commuters are also offered lower fares based on their income. With larger organisations already involved, smaller brands are also exploring how sliding-scale pricing can be a form of corporate social responsibility (CSR). 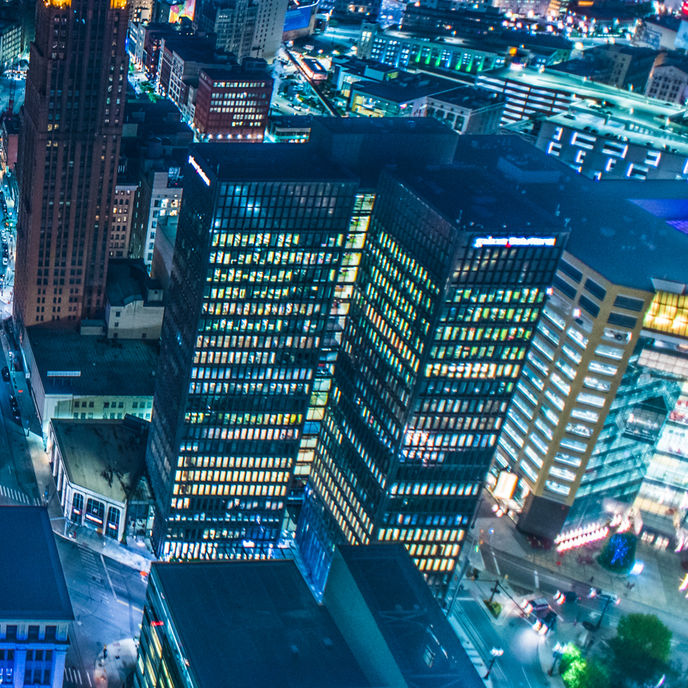 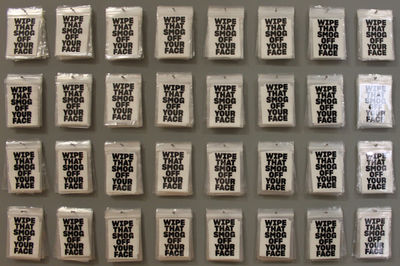 Wipe That Smog Off Your Face, Air Hack, Makerversity, London 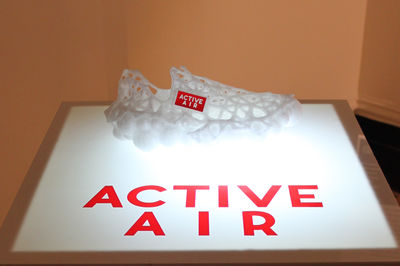 London – Co-working design space Makerversity recently worked with local designers on a set of civic hacks that address some of today’s largest societal issues. The most recent series, Air Hack, explored the harmful effects of air pollution and how designers could provide radical solutions to deal with the environmental threat.

The first of two winners, Dirty Messages, focused on the effects of toxic air on commuters. The awareness campaign encouraged travellers to capture the pollution from their skin using wet wipes and send the used wipes to local authorities to demand action. Participants can also sign a petition on the packaging.

The second winner, Active Air, provided a potential solution to reverse the damage of air pollution. Designers developed a pair of trainers that filter the air at ground level through the soles of the shoes. The one-way valves let in polluted air, which is then pushed out through the layers of filters in the sole when you step down – expelling purified air.

For more on how brands are taking an active role in addressing poor air quality, see our Smog Life series.

In 2018, China will continue to account for much of luxury’s growth, with sales in the market expected to rise between 20% and 22% in 2018, according to Bain & Co. Despite gearing towards more domestic luxury consumption, young Chinese consumers are pushing luxury sales due to their growing interest in streetwear and digitisation.

‘Chinese consumers continue to stand out as a growth-driver for the industry and are more fashion-savvy and digitally advanced than ever before, accelerating the shift of the industry to the Millennial state of mind,’ says Claudia D’Arpizio, partner at Bain & Co.

As Millennial women start their own families, brands are creating pregnancy products and services that reflect their tastes and can be efficiently integrated into their lifestyles.

While many gyms offer pre-natal classes they tend to be limited in capacity and are not necessarily focused on offering specialised exercise plans that will help women with both their delivery and post-natal recovery. Tired of gyms that treat pregnancy like an illness or have a lack expertise, Carolina Gunnarsson and Joanie Johnson created Fit Pregnancy Club (FPC), a New York gym that caters for mothers to be and new mothers.

With many women keen to seek advice when it comes to using cosmetics during pregnancy, US brand Hatch has set out to address this area with the launch of Hatch Mama Beauty, products that cater for – and support – the changing needs of women’s skin during pregnancy. 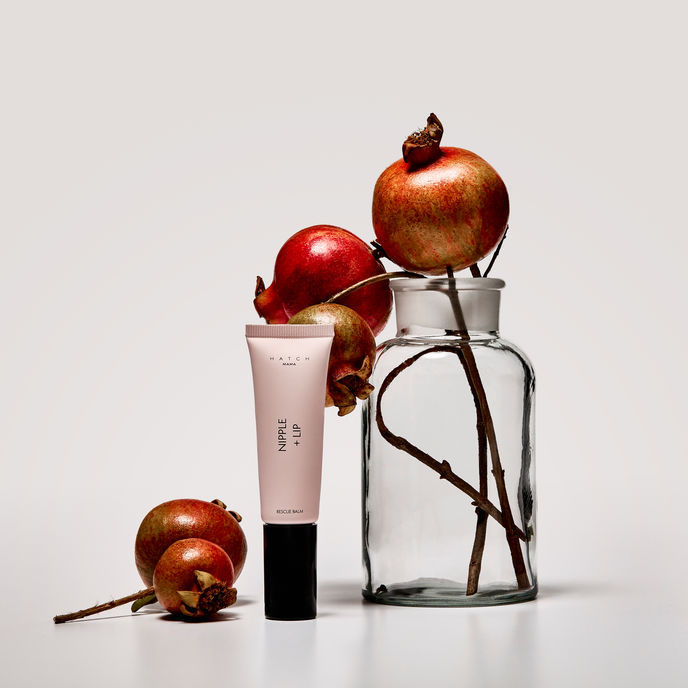