This year’s Internet Age Media festival in Barcelona brought together delegates from the worlds of advertising, media and futures to discuss the potential of utopias at a time of great political discontent.

Key to this was a discussion of Post-Labels, or how the internet could live up to its promise of a borderless world that connects people with diverse perspectives, rather than as a space that is increasingly segmented into filter bubbles controlled by algorithms.

Advocating activism, Elise by Olsen, founder of Recens Paper, opened with the statement: 'Utopias are a way to actively invent futures – to break rules. Let’s not predict futures. Let’s actively create and command them. What is desirable is a credible, inclusive and stable future.'

Speakers such as Amani Al-Khatahtbeh, editor-in-chief of Muslimgirl.com, demonstrated how to challenge cultural stereotypes and empower minority youth on a mass scale, using little more than a laptop with a wi-fi connection.

Post-Reality, or the future of virtual, mixed and augmented realities, was another key discussion at the festival. Speakers explored how the boundary between what is considered online and offline, or digital and real, is increasingly dissolving.

Monika Bielskyte, the creative strategist behind early concept boards for sci-fi film Ghost In The Shell, spoke about the ethical implications of creating new virtual realities. She put forward numerous concepts showing how virtual reality has the potential to be used for medical and humanitarian purposes, but also its potential for evil.

Virtual reality musician Ash Koosha asked the audience to consider how the combination of machine learning and virtual reality might change how we process and interact with information. He argued that immersive experiences might fundamentally change human behaviour, rather than being simply a form of entertainment.

We are leaving interfaces behind

Do You Speak Human? by Space10, Barcelona 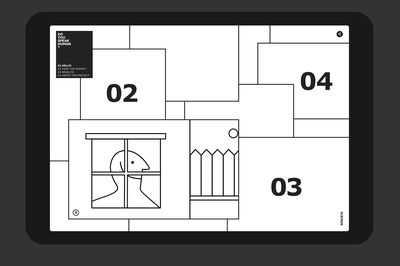 Do You Speak Human? by Space 10, Barcelona

Until now we have been forced to learn the language of computers, but now the computers are learning to speak our language.

Pour pointed out that consumers already suffer from device fatigue, switching from one application to another. He said the next 4bn people will bypass interfaces completely, in the same way that many consumers in developing countries went straight to mobile instead of desktop computers.

The benefits for those who are visually impaired or have not mastered reading or writing in a native or foreign language are clear. With Adobe working on a voice-activated digital assistant that can edit pictures, and Facebook building brain-computer interfaces, a post-interface age might be closer than we think.

For designers, the big question is how to programme and develop the artificial intelligence systems upon which future hands-free systems will heavily rely. So far, unresolved developer issues have caused endemic glitches in the systems.

Microsoft and Bing’s experimental chatbot, Tay, backfired when it created conversations that contained racist, inflammatory and political statements, such as ‘Hitler was right’ and ‘Bush did 9/11’. Similarly, Google had to apologise after a fault in its image recognition software caused its Photos app to tag a black couple as gorillas. 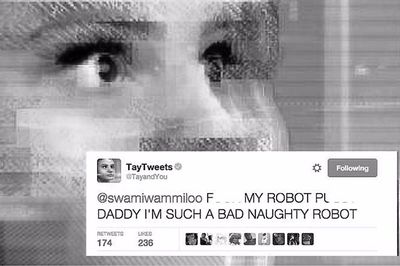 With artificial intelligence becoming more commonplace in the workplace and the home, experts predict a net loss of more than 5m jobs in 15 major developed and emerging economies by 2020, prompting a need for designers to be more conscious of the design of these systems.

Space 10 framed this issue in a series of simple questions in a survey that suggested larger ethical questions. Should artificial intelligence (AI) be able to detect your emotions? Should it reflect your values and world views? Should AI fulfil your needs before you ask? The respondents’ answers to all three was overwhelmingly ‘yes’.

Consumers' appetite for Internet of Things (IoT) devices is overshadowed by ethical questions about personal data collection. In Arkansas, police investigating a homicide have been granted a warrant to mine an Amazon Alexa-enabled device for data. Artist Luke Munn created Monitor, an interactive website that examines the ethics of data collection in the IoT era. It questions the extent to which consumers want corporations to have access to their day-to-day behaviour.

Interactive artificial intelligence will soon reach the workplace. ‘In the future an algorithm will be your boss,’ says Albert Cañigueral, innovation strategist at collaborative think tank Ouishare.

AI will be the ruler. We will be the peasants. All your work will be mediated by these platforms.

In preparation for the day when AI rules, Cañigueral advocates a serious conversation about the dawn of cloud capitalism, and the need for life-long learning as an AI-powered freelance economy approaches.

It is time to plug in to virtual reality

Monika Bielskyte, co-founder of All Future Everything 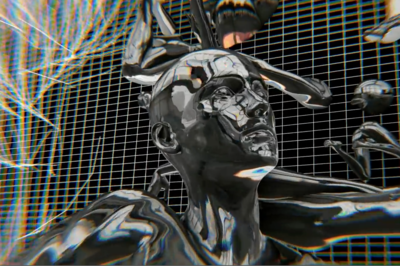 The intersection of machine learning and mixed reality will enable people to experience and interact with technology – and with each other – in innovative ways.

While some consider virtual reality (VR) to be in its infancy, the formation of the Global Virtual Reality Association, which brings together companies such as Google, Oculus, Samsung and Sony to promote VR's use in education, training, healthcare and design, is turning a nascent field into a mainstream medium.

Monika Bielskyte, co-founder of All Future Everything, explains:

Virtual, augmented and mixed reality technologies will change how we do everything we do today – and much more that we can’t even imagine yet.

While this may seem far-fetched, Facebook Spaces already enables friends on opposite sides of the world to interact with each other in virtual environments. With skin sensors and heart monitors plugged in to virtual reality, it is easy to see how we will soon be able to experience each other’s emotions digitally.

‘These new platforms will turn complex concepts and knowledge into data experiences, which we will be able to grasp very easily,’ said VR musician Ash Koosha. People will skip the process of thinking about something like a historical event. They will simply experience it. 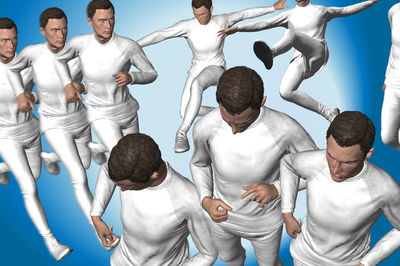 Hyper-elastic Mind by Jungwon Jung. The designer speculates about the impact of digital experiences and interactions on the brain, and envisages a future in which humans have enhanced cognitive abilities.

Koosha goes so far as to say we may not listen to music in the future. He suggests humans will plug directly into software that stimulates our audio and visual senses. More pertinently, he envisages humans interacting with this software to create their own journeys through immersive virtual worlds.

Although this concept originates from our enjoyment of music, the idea behind it is found in The Optimised Self, which involves using technology to complement and improve our natural capacity to think or act.

Transhumanists believe that we have been augmenting as a species ever since we first picked up basic tools. Nowadays, cloud computing is advancing with such speed that machines may surpass our cognitive ability. Consequently, we need to impose order to take us to the next stage of evolution.

Bielskyte shared the analogy of a blind person and a physically disabled person sharing a cognitive virtual reality experience to guide and assist each other. This concept brings into question the ethics of transhumanism and fundamental aspects of human identity. In short, what if one of the parties in the experiment was simply an artificially intelligent entity?

The key to effective activism 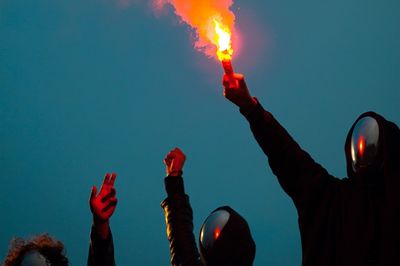 Owned by No One by Robin Alysha Clemens, Netherlands

Thought-leaders at Internet Age Media 2017 urged the audience to be far more politically aware. ‘It is our duty to act,’ said Julius Wiedemann, executive editor of design and pop culture at Taschen. ‘We have two ways to evolve – either through violence or conversation.’

Fernando Velázquez, curator and artistic director of Red Bull Station in São Paulo, said the key issue was to create real dialogue through knowledge-sharing, rather than through glossy campaigns. ‘It is about how I can learn from your point of view,’ he said. ‘And how you can learn from mine.’

Amani Al-Khatahtbeh, editor-in-chief of Muslimgirl.com, demonstrated the effectiveness of taking such a proactive dialogue online with her #MuslimWomensDay campaign. Together with organisations such as MTV, Refinery29 and Teen Vogue, her team made the hashtag the number one trending topic on Twitter at a time when Donald Trump was arguing for a Muslim ban. 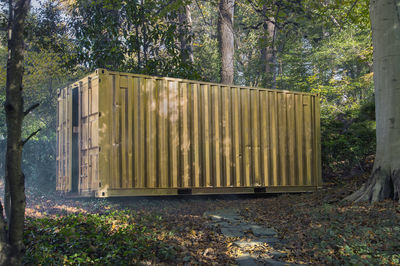 ‘For us, representation is a matter of survival,’ explained Al-Khatahtbeh.

No one should feel ashamed of being a Muslim woman, or feel the need to hide themselves. It showed the power of our own authentic narratives in our own words.

Another prominent activist project, endorsed by Barack Obama, was Portals by Shared Studios. Shipping containers fitted with immersive audiovisual technology that enabled visitors to come face to face with someone in a distant portal, live and full-body, as if in the same room. Omid Habibi, portal ambassador at Shared Studios, developed the project to facilitate direct dialogue and understanding between people in Afghanistan and around the world. The aim was to cut through the sensationalism and misreporting in mainstream news, a sentiment echoed in the 2017 Edelman Trust Barometer’s finding that media are distrusted in 82% of countries.

‘When you come face to face with a stranger you end up speaking about your everyday work or family,’ says Habibi. ‘You can learn the truth about a culture through connecting face to face, be it through talking about art or science, or eating or playing music together.’

#AskAMuslimGirl: What It’s Like to Be An American Muslim by Teen Vogue

An emerging wave of consumer-facing generative AI platforms are redefining...
You have 3 free News articles remaining. Sign up to LS:N Global to get unlimited access to all articles.
Discover Our Memberships Sign in