New York – A new multi-city interactive ad campaign by ESPN brings life to what would otherwise be static storefronts in Chicago, Boston and New York. The Monday Night Football campaign, created by Wieden+Kennedy, gives passers-by the chance to test their receiving abilities against a digital quarterback of their choice.

Pedestrians start the game by selecting options on the touch-screen window, then attempt to catch balls thrown at them by a virtual quarterback on the giant screen. The set-up uses gesture-recognition technology to track players’ moves. High-scoring players may submit their scores and compare them in real time with those attained by players in the other cities.

In moving away from the static, purely visual experience, the ESPN storefronts help transform a display space into a sensory, experiential environment – a clever way to lure shoppers away from their computer screens and back onto the high street. 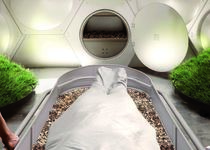 Entertainment : Media : Screen
Load More
You have 1 free News articles remaining. Sign up to one of our membership packages from just £100 a month.
View Subscription Offers Sign in